From the tree-covered stoops of their brownstones, residents of Dean Street, between Nostrand and New York Avenues, have seen a number of changing faces over the past decade. Boasting some of the neighborhood’s most active and influential residents, this block is now more diverse than ever as new residents integrate themselves into the tight-knit community that Dean Street is known for.

Through the lens of portrait photography, Brooklyn Deep tells the story of this rapidly changing block in Crown Heights North and the residents that now define it.

Booker T. Hannible, 57, has lived on the same block in Crown Heights, Brooklyn for over 25 years. “I’ve been around a long time,” said Hannible. “The house on the corner used to be a crack den. Now when you look around you can see big improvements, everybody’s taking care of their brownstones.” 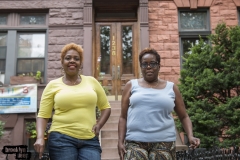 Gail Muhammad, 64, poses with her daughter Kay Pryor, 47, in front of their 16-year home on Dean Street. “Our block was one of the first to be landmarked in Crown Heights North,” said Muhammad. “You won’t see a highrise going up on this block.” 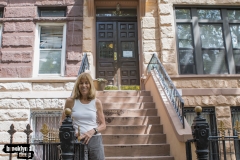 “This was the first condo on the block,” said Carolyn Hughes, 68. “Most gentrifiers are not my age and I feel like an intruder in a community that is now being threatened,” said Hughes, who moved from Boreum Hill to Crown Heights two years ago. “But I feel welcomed by the people who live here.” 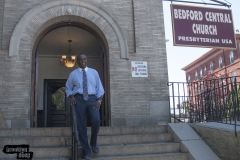 Rev Dr Clive E. Neil, 56, poses in front of the Bedford Central Church on Dean Street. Pastor Neil, who lives in Long Island, began preaching at the church 26 years ago. “Every weekend there was someone who got shot over here,” said Neil. “There’s been improvement, but we’re still going to feed about 300 people in our food pantry today.” 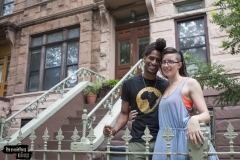 Najja Plowden, 34, poses with his fiancee Keren, 25, in front of his 10-year home on Dean Street. “My family owns a brownstone on the next block,” said Najja. “[It] had a lot of crime, this block is a completely new world.” 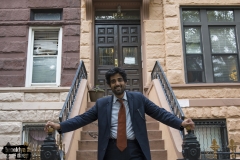 Ajay Madiwale, 30, moved to Dean Street with his wife, Nassime, in January of 2014. “I was looking all over,” said Madiwale. “But Ideally I wanted to live in a neighborhood that had shit going on. The change is so rapid that you almost feel it month-to-month.” 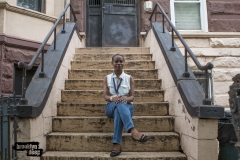 Joyce Webster, 52, sits in front of her 30-year home on Dean Street. “It gives you a scary feeling when the young people start taking over the neighborhood,” said Webster. “I tell my neighbors, keep your eyes open.” 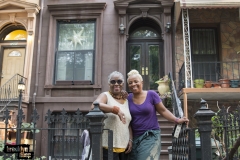 Sisters Allison and Donna Sampson pose in front of their 18-year home on Dean Street. “Over the last four to five years there are less African Americans than before,” said Allison. “But some of the first people we met are still here.” 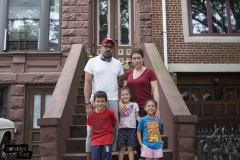 Paul and Saskia Thompson pose in front of their home with their children Rio, Aster and Stella. “When we first drove down this block, it was like coming into the old Brooklyn my mother told me about,” said Saskia. “It really felt like a sanctuary.” 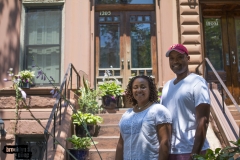 Craig Samuel, 45, poses with his wife, Laura, in front of their 11-year home on Dean Street. “The week we moved in there were three other families moving in,” said Craig. “You could feel the change on the block. That year about eight buildings changed hands.” 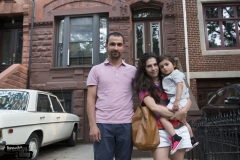 Bruno Pinto, 30, poses with his wife Rita, 27, and their two-year-old daughter, Rita Luz. Two years ago the Pinto family moved to 1232 Dean Street, where they rent a floor from the owners, Paul and Saskia Thompson. “We are from Portugal so our culture is different,” said Bruno. “It’s really peaceful but more crowded.” 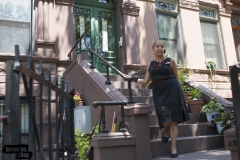 Paula Pinnock poses in front of her 34-year home on Dean Street. “I used to drive by this block as a teenager on the 65 bus,” said Pinnock. “I always loved this block.”